We offer a range of ways to help you. From chat, email and phone to bookable appointments with a librarian.

Our referencing page helps you reference sources correctly with guidance for an extensive range of print and online sources.

Visit the Library blog for advice on study, student living and resources, news and technology highlights plus random fun or topical items which may be of interest.

Listed below are links to other map-related sites that you may find useful. Please contact the Map Librarian if you find an interesting site that could be included here

Portsmouth is one of the most mapped places in Britain. Below is a selection of historic map images that can be found online. Note that some early maps show planned defences rather than structures actually built. For detailed descriptions of early maps of Portsmouth see Hodson, D. (1978). Maps of Portsmouth before 1801: a catalogue. City of Portsmouth.

In October 2020 the British Library released 17,000 images of maps and views from George III’s Topographical Collection (K.Top) on the image-sharing site Flickr Commons. You can search for specific items via Explore. Add ‘George III’ to your search term in order to bring up only maps and views in the K.Top collection. When you have found the record for the item you require, select ‘I Want this’ and then look for 'Digitised item Go', which will take you to the relevant image(s) on Flickr.

An additional 32,000 images were released in July 2021, comprising George III’s collection of atlases and albums of views, plans, diagrams, reports and surveys, produced between 1550 and 1820. You can view the full collection on Flickr by visiting the Topographical collection of King George III.

Here are a selection of Portsmouth maps available online

16th Century
1545 [Plan of the fortifications of the town of Portsmouth]
This is the earliest map of any town in Britain to be drawn entirely to scale.

1725 A Survey of Portsea Island

1743 A plan of Portsmouth and the harbour

1750 A plan of the town and fortifications of Portsmouth, with the Blockhouse Fort and the Gunwharfe
This map can be viewed as an overlay on a modern base map by visiting the British Library's Georeferencer

c.1750 A Plan of Portsmouth and Gosport

1750 A plan of Portsmouth and its harbour

1773 Plan of the island of Portsea, shewing the present fortifications of Portsmouth, Gosport, lines and out-forts

1751 Plan of the Town of Gosport; with New Fortifications begun in the Year, 1748, shewing in Yellow the Works proposed to be completed

Equal Earth Political and Physical Wall Map
Large, free, public domain, high resolution world maps to download in JPEG and Adobe Illustrator formats. The maps are equal-area, so continents are shown at their true size relative to each other. Usefully, the political map can be centred on one of three different regions.

CIA World FactbookWorld and continental scale reference maps that can be downloaded in JPG or PDF formats. Each country profile has an associated GIF map.

OpenTopoMap
The largest crowd-sourced topographic map project in the world.

British Geological Survey Maps Portal
This excellent resource provides free access to view high resolution digital facsimiles of almost all small and medium scale maps produced by the British Geological Survey since mapping started in 1832. This is a great place to start exploring the geology of Great Britain and, when you've found a map that covers your area of interest, remember that most are available as paper copies from our Map Library (many on 4-day loan).

Charles Close Society Sheetfinder
Type a British or Irish address, postcode, or placename to display a list of Ordnance Survey One-Inch, 1:50,000 and six-inch County series map sheets for that location. The list often includes a direct link to that map so it can be viewed.

Old Hampshire Mapped
This interesting site presents early maps of Hampshire from 1575 to the mid-nineteenth century. High resolution map images include those by Saxton, Speed, Ogilby and Greenwood.

Old Sussex Mapped
This site provides access to a range of historical maps of Sussex from 1610-1837. It includes a bibliography of sources used and a comparative list of names used on the featured maps.

Phonebooth
PhoneBooth is a project run by the LSE recreates Charles Booth’s socio-economic maps of London as an interactive digital website and smartphone app. The app enables users to plot their locations on Booth’s maps and retrieve his historic observations.

SABRE (The Society for All British and Irish Road Enthusiasts)
This society provides access to a variety of historic maps, including mid-20th century OS One Inch maps and 1920s Bartholomew maps.

Soilscapes
A free viewer that provides a summary description of the soils at specified locations across England and Wales.

TopoMapViewer
A free web application that allows you to view standard NGI topographic maps and orthophotos.

Cartesius
Free access to a wide range of scanned historic maps of Belgium.

InfoTerre
Access a range of data from France's geological survey (the BRGM), including geological maps from 1:1M to 1:50,000.

National Land Survey of Finland
The Citizen's MapSite allows the browsing and printing of NLS topographic maps covering all Finnish regions up to a scale of 1:16,000.

Map on Demand from the BKG
Map on Demand (MoD) is a web application that can be used to create print-ready maps from the Federal Agency for Cartography and Geodesy.

National Atlas of Hungary
The digital version of the National Atlas of Hungary, available to download chapter by chapter. The International Cartographic Association awarded 1st place to Vol.2, Natural Environment in the ICA Map Awards 2019, describing the publication as "A comprehensive, and detailed atlas. The cartography is lavish and sets Hungary’s natural environment in its human context. The maps are accompanied by numerous well presented graphs, text and infographics".

Iceland Map Window
Zooming in on this online map of Iceland provides access to high resolution raster images of the 1:100,000 map of Iceland, a series that is descibed on the National Land Survey of Iceland web site as being "among the most beautiful maps available of Iceland".

GSI Maps
Web mapping application with maps from the Geospatial Information Authority of Japan (in Japanese).

Environmental Health Atlas
The maps focus on environmental themes, including air and water quality. This is where you can access a digital version of the 1:50,000 Netherlands soil map (Bodemkaart van NL 1:50,000).

Norgeskart
Statens Kartverk is the principal survey and mapping organisation in Norway and their Norgeslart application provides zoomable maps for the whole of Norway up to a scale of 1:5,000.

National Atlas of Spain
Brings together all three editions of the National Atlas on one site. Winner of the category "Digital Products (Maps and Digital images)" at the 24th International Cartography Conference in Santiago, Chile, 2009.

Swiss map viewer
A fantastic tool for the interactive presentation of Swiss topographic maps and thematic data. The 'journey through time' option allows you to layer maps of different dates, from the mid-19th century to the present day. Maps can be even be viewed in 3D.

Gateways to maps and map collections

David Rumsey Map Collection
A superb historical map resource with images from one of the world’s largest private map collections.  More than 150,000 maps, with a particular focus on North and South America.

Old Maps Online
An easy-to-use gateway to historical maps in libraries around the world that allows the user to search for online digital historical maps across numerous different collections via a geographical search.

George III's Collection of Military Maps
This collection of military maps comprises some 3,000 maps, views and prints ranging from the disposition of Charles V's armies at Vienna in 1532 to the Battle of Waterloo (1815).

German World War II Captured Maps
A significant collection (more than 10,000) of digitised maps that were captured from the German military in the Second World War. The collection covers much of Europe.

Historic England
Find out how to access the collection of more than 4 million aerial photos of England.

The Charles Close Society for the Study of Ordnance Survey Maps 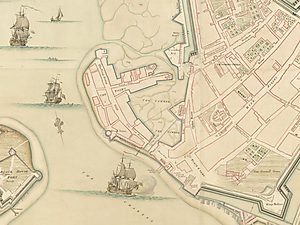 An extract from "A plan of the town and fortifications of Portsmouth, with the Blockhouse Fort and the Gunwharfe" by Desmaretz, 1750. From the BL King's Topographical Collection.